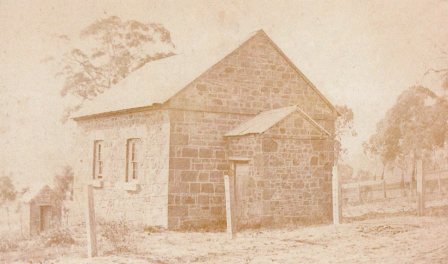 The story of this place is not so much about the building, but about people.

The building remains as evidence of the lives of people who lived nearby and worshipped here, and of what they believed.

A History of The Cherry Gardens Methodist/Uniting Church Chapel

The district 10 km south-west of Stirling was known by the Aborigines as pinjatjawinga – ‘sweet water place’. The Adelaide (Kaurna) tribe made excursions into the hills to gather wattle gum and soak the flowers of grass trees and honeysuckle for their sugar content. The English name was given by Isaac Jacobs, Henry Field and Edward Burgess circa 1839, when they went into the hills to cut kangaroo grass (Themeda triandra) for stock fodder and came across an abundance of native trees, with small cherry-like fruit. The early pioneers initially met in each other’s homes, but the first minister, Reverend Danial Draper realised the need for a place of worship.  In 1847 he encouraged the congregation to start erecting a church and land for that purpose was donated by Mr Field on Hicks Hill Road, and whilst they were endeavouring to erect a Chapel, religious services were held at the homesteads of Mr Field, the Broadbent’s and other families in the district.  With the true pioneering spirit the Bible Christians and Wesleyan Methodists amalgamated to erect a chapel which first opened in March 1849 and that building, with additions, is still being regularly used for services, and holds the honoured 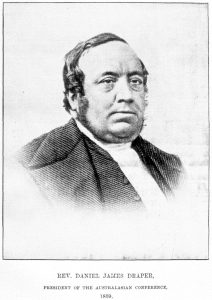 record of being the oldest former Methodist Chapel south of Adelaide still being used for its original purpose.  Up to 1847, the congregation was in the Southern Adelaide Circuit, but that year became part of the Willunga Circuit, then in 1855 was in the newly created Clarendon Circuit with Clarendon, Coromandel Valley, Reynella, Meadows, Ka

The consecration of the newly erected Wesleyan Church is reported in the Register, 28

March 1849, page 2e:  “The congregation of the newly erected Wesleyan Chapel assembled in public worship in March 1849.  About 120 sat down to tea in celebration.  The chapel which is a perfect model of neatness is capable of accommodating about 150 persons and the worthy and indefatigable superintendent has the satisfaction of knowing that not one penny of debt encumbers the building.”  The only way that small chapel could have accommodated 150 persons was for them all to be standing up!  The Circuit minister at the time was Reverend Nathaniel Bennett.

During the early days, the mode of conveyance was by horseback. The first person to be baptised in the

chapel was Caleb Lewis in 1850. The first marriage that we have a record of was solemnised between Lucy Middleton and Joseph Boothey on 25 December 1849. Henry Jacobs and Miss Eliza Waller were married on 27 September 1860 by the Reverend M. Wilson.  Other earlier weddings were Harriet Gardner and Philip Lemaistre on 2 May 1862 by the Reverend Nathaniel Bennett and Mary Ann Lewis (sister of Caleb) and John Bails on the 27th June, 1862.  Numbers of visiting preachers travelled by the power of their own two feet, as did Mr Illman who was known to walk from Unley to Cherry Gardens to conduct worship on a Sunday morning and then to stop off and preach at the Coromandel Methodist Church later in the day.  In 1865, the Rev. J Allen was Superintendent Minister of Clarendon Circuit.

The year 1920 marked an organisational change for Churches in the area.  Coromandel Valley and Blackwood separated from the Clarendon Circuit.  In the mid-1970s, the decision was taken to provide a pastor whose first responsibility would be to Coromandel Valley; responsibility extended to Cherry Gardens and Iron Bank. There were also a series of organisational changes in this period. In 1977, the Uniting Church came into being as the result of the combining of the
Methodists, Presbyterians and Congregationalists. What had been the
Blackwood Methodist Circuit now became the Blackwood Uniting Church Parish.
Soon, the Aberfoyle Park, Flagstaff Hill, Cherry Gardens and Iron Bank
Churches were added to this, and in 1986, the Parish divided into two as
population growth continued. Coromandel Valley Church found itself part of
the Southern Hills Parish, along with Aberfoyle Park, Flagstaff Hill, Iron
Bank and Cherry Gardens. In the early 1990s, Aberfoyle Park and Flagstaff
Hill formed a separate Parish and then, in the year 2000, each of the
Churches remaining in the Southern Hills Parish – Coromandel Valley, Iron
Bank and Cherry Gardens – became a separate Parish in its own right.

Among the earnest and faithful workers in those early days were Henry Field, Isaac Jacobs, Luke Broadbent and William Brumby, the last named and Mr I Jacobs, being Sunday School Superintendents. The zeal and fervour of the early settlers manifested itself in overflowing congregations, and it became imperative to add to the building. With their usual cheery optimism the stalwarts of the Chapel, making light of obstacles, during the 1890s the first additions were completed. Messrs Elijah and John Broadbent (sons of Luke Broadbent) laboured long and earnestly in the cause of religion, earning for themselves the names of “Sons of Thunder” by their vigorous preaching. As a result of the zealous labours of these and many others the State has benefited far and wide in a manner that cannot be measured in material possessions. In the Centenary year of the State, the descendants of those early pioneers erected a porch in keeping with the existing structure. The chapel is surrounded by slate headstones – some made by George Sara of Willunga.  Up to the year 1882 the ground of the chapel yard constituted the local cemetery and the last to be buried there was Isaac Jacobs in 1894, one of the founders of the district.

A Ladies Church Guild formed in 1936, supported the church both spiritually and financially until recent times.

The church celebrated its 160th anniversary in March 2009.

The Church commenced building a new meeting room in 2011 to replace the 15′ square ‘Bob’s Place’ shed used as a meeting room and Sunday School for more than 40 years.  The new meeting room has a similar floor area to the old church, a good kitchen, toilets for the disabled, air-conditioning, a high definition video projector and a sophisticated sound system.  There is a deck with a view over the valley which has a table and seating for people to enjoy the lovely clean air, the view and the birdsong which is almost always around the grounds of the church.  During renovations to the Coromandel Valley Baptist Church (now part of the Coromandel Valley Uniting Church complex), one of the 1894 windows was surplus to requirements.  That 120 year old window has now been restored and built into the Eastern wall of the new meeting room.

A memorial wall has been constructed buy church volunteers as a retaining wall for the new additions.  It is planned that people with a connection to Cherry Church will be able to place a memorial plaque on that wall to remember them.  The courtyard will be developed as a place of remembrance and reflection.